*Following the documentary there will be a discussion with elected officials including Sen. Jerry Ortiz y Pino, medical cannabis advocates, and drug policy experts.


Weed the People is director Abby Epstein’s effective exploration into the way cannabis oil is being used as an alternative medicine for kids battling cancer. The film introduces several patients, from Sophie Ryan, a baby with a brain tumor, to AJ Kephart, a teenager with stage 4 bone cancer, to show how they are responding to doses of cannabis oil—often in conjunction with chemotherapy. The results, as the film shows, are nothing short of miraculous.
The stories are all heartfelt. Epstein wants Weed the People to provide folks with hope. It may jerk tears when one subject encounters a setback, or another patient loses their battle with cancer, but there will also be tears of joy with the film’s multiple success stories.

CBS News Story on 'Weed the People'
A significant part of the documentary is devoted to questioning the dearth of research for medical cannabis in the U.S. and the government’s lack of support for the viability of cannabis oil’s medicinal properties. (The DEA declined loosening restrictions on medical cannabis.) Because marijuana is classified as a Schedule I drug, it is not tested for its healing properties—despite its use a century ago, before weed was criminalized. Moreover, scientists in Israel and Spain are making great progress in showing how cannabis is killing cancer cells. THC is shown for reducing tumor growth and metasticization.
As such, individuals who believe in the healing properties of marijuana are on the front lines of this battle, and Weed the People showcases the important and groundbreaking work they are doing in the field. Dr. Bonni Goldstein, a cannabis physician, counsels patients and provides support for families like the Petersons, who have to move from Chicago to California to be eligible for medical cannabis.

Likewise, Mara Gordon, co-founder of Aunt Zelda’s Oil, creates THC and CBD oils that are given to her patients to kill cancer cells in exchange for collecting their data (to determine efficacy). Her efforts are altruistic; she makes her oils in her kitchen, and charges families for the source plant but absorbs her overhead costs. Mara claims she doesn’t have medical training, but she does have experience, and her skills and care provide invaluable support for her patients and their families. Weed the People generates some drama when Tracy, the mother of a patient Mara is treating, becomes a “momcologist,” and starts her product line, CannaKids. Tracy stopped using Mara’s more expensive products and used the knowledge she gained from working with Mara to her own ends.

The ethical, legal and financial aspects of this burgeoning industry are indirectly addressed by Epstein’s film. There are some discussions of the expense, and Jim von Harz raises money through a fund to help supply cannabis oil for his daughter’s ongoing treatment. One mom, Angela Smith, is given an oil that is determined to contain rubbing alcohol, suggesting that there are hucksters out there offering faulty products. Moreover, when the Peterson family return to Chicago, “angel donors” illegally send cannabis shipments to continue their son’s treatment. These are all fascinating if underexplored topics that could easily support another film on the subject of medical cannabis.
But the broad approach and focus on the families and practitioners here is not a major drawback. Although Weed the People is one-sided—in that it does not give a voice to opponents of medical cannabis—this seems like a deliberate decision. Epstein is using the impassioned testimonies of parents to makes the film’s salient points.

Several parents saw cannabis oil therapy as a last resort—because they were willing to try anything to save their children. In doing so, they become the treatment’s greatest advocates. As mothers like Tracy and Angela are amazed by the noticeable changes in their kids’ health, viewers, too, cannot help but be moved by the good news they receive and the support they get from their kids’ oncologists. It is gratifying to see footage of Angela’s son Chico, who suffers from a soft tissue cancer called rhabdomyosarcoma, lying listlessly on the couch in early scenes riding a bike by the film’s end. When Chico wants to get a grow kit for his 14th birthday, it is both provocative and oddly satisfying.
Weed the People makes a convincing case for the progress and advances most of the kids profiled here experience. The film wears its bias proudly, as it wants to foment change and save lives. That message comes across clearly here, even if some folks may remain skeptical.

*Following the documentary there will be a discussion with elected officials including Sen. Jerry Ortiz y Pino, medical cannabis advocates, and drug policy experts.

Prepare for the discussion with this related article and proposed legislation:
'New Mexico Medical Cannabis Program News, Legislation, and Advocacy'


Lawmakers in the Roundhouse are preparing legislation for the upcoming 2019 Regular Session and now is the time to speak out and advocate for the changes the Patient’s Medical Cannabis Program needs as it has been severely neglected by the state over the last several years.
Read More At: http://www.cannabisnewsjournal.co/2018/11/new-mexico-medical-cannabis-program_11.html 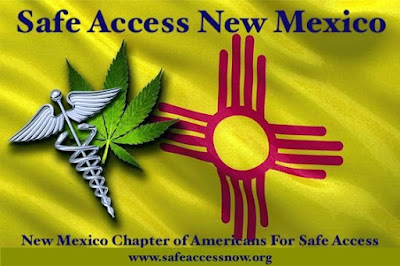