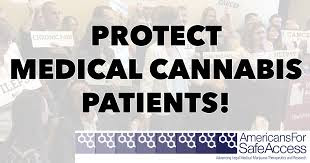 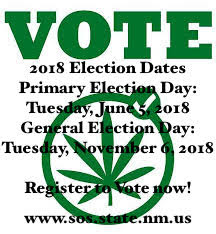 ELECTIONS 2018
U.S. Senate: New Mexico will elect one member to the U.S. Senate in the election on November 6, 2018. The election will fill the Class 1 Senate seat held by Martin Heinrich (D). He was first elected in 2012.

Qualified minor party candidates may appear on the General Election ballot and are nominated for office pursuant to the party rules on file with the Secretary of State and pursuant to NMSA 1978 §§ 1-8-2 and 1-8-3.Civic Engagement will be very important for Medical Cannabis in 2018; especially for Medical Cannabis Programs, for Patients, for Caregivers, for Producers, for Medical Providers, for Labs and for Manufacturers. 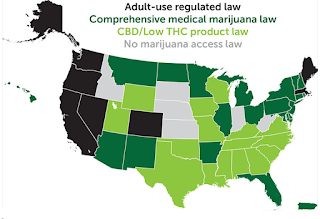 Here is a few great videos to watch from the video series in the Medical Cannabis Advocate's Training Center section on Americans For Safe Access YouTube channel. ASA believes that good policy is created when those who are most affected are at the table. Just because you are medical cannabis patient, it doesn't mean that you automatically have a degree in public policy. ASA has always been committed to demystifying political systems and providing advocates the tools they need to participate in the processes in a meaningful way. Learn all about grassroots organizing, citizen lobbying, media spokesperson training, and much more. 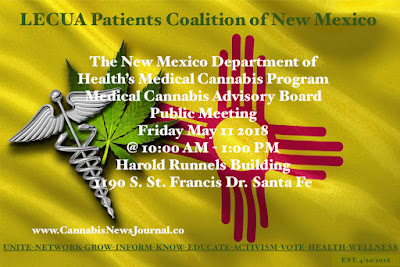 Seven state executive offices are up for election in New Mexico in 2018:

Libertarians
No Libertarian candidates have formally declared yet

Context of the 2018 Governor election-Noteworthy events-Campaign finance lawsuitOn November 28, 2017, Judge Judith Herrera issued a preliminary injunction allowing Rep. Steve Pearce (R) to access the nearly $942,000 in funds in his congressional campaign account while a legal battle over New Mexico's campaign finance laws proceeded. The case was brought by Pearce against the office of Secretary of State Maggie Toulouse Oliver (D) and challenged a state law which prohibited Pearce from transferring the funds in his congressional campaign account into his gubernatorial campaign account. Under existing state law, a transfer from a campaign finance account used to run for federal office to a campaign finance account used to run for state office is considered to be a transfer between two separate campaigns and is therefore capped at $11,000, even when the accounts are associated with the same candidate. Pearce contended that this law was an undue violation of his freedom of political expression since the state does not limit the transfer of funds between two separate campaign finance accounts used by the same candidate to run for different state offices. As of Judge Herrera's preliminary injunction, Pearce had raised a total of $1 million for his gubernatorial campaign, while the Democratic candidate who had raised the most money, Rep. Michelle Lujan Grisham (D), had raised a total of $2.4 million.
Lieutenant Governor Primary candidates
Democrats
Former Public Education Commissioner Jeff Carr
Doña Ana County Commissioner Billy Garrett
David McTeigue
Former state Rep. Rick Miera
State Sen. Michael Padilla

New Mexico Public Education Commission election, 2018
Note: The following list of potential and declared candidates is not official. It will be updated after the candidate filing deadline has passed and the official list of candidates becomes available.

New Mexico Public Regulation Commission election, 2018Note: The following list of potential and declared candidates is not official. It will be updated after the candidate filing deadline has passed and the official list of candidates becomes available. 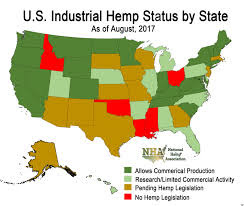 Legislature elections, 2018All 70 House seats are up for election in 2018. New Mexico state representatives serve two-year terms, with all seats up for election every two years.

Democrats have a chance for a Democratic trifecta in 2018 if they keep control of the House and win the governor's office. The New Mexico State Senate is not up for election in 2018. In New Mexico's 2018 gubernatorial election, the overall race rating from five separate outlets was Lean Democrat in June 2017. Gov. Susana Martinez (R) was elected to a four-year term in 2014 and is term-limited in 2018. Martinez was re-elected with a margin of victory of 14 percent in 2014.

New Mexico came under divided government when it elected Susana Martinez (R) as governor in the 2010 elections. From 2003 to 2010, Democrats had trifecta control, meaning they held both legislative chambers and the governor's mansion. Democrats retake control of the state House in the 2016 elections after Republicans held the chamber from 2015 to 2016. The state Senate was already controlled by Democrats prior to the 2016 elections. 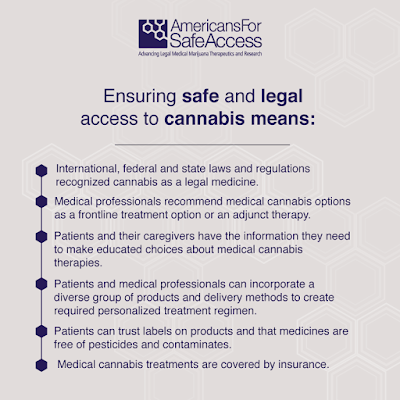