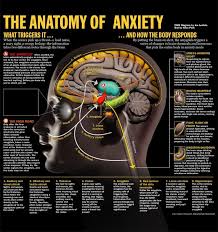 While all human beings experience anxiety throughout their lives, Anxiety Disorders are a set of mental illnesses characterized by chronic and overwhelming emotions of fear, anxiousness, restlessness, and crippling worrying. Examples of Anxiety Disorders include: Panic Disorder (which may cause complications of the heart); Social Anxiety Disorder; Selective Mutism (an inability to speak during specific but otherwise normal situations); various Phobias; Agoraphobia; Anxiety associated with Post Traumatic Stress Disorder (PTSD); Substance Induced Anxiety (alcohol abuse; drug abuse; opiate abuse; and even medication induced); and Generalized Anxiety Disorders which run the gamut of social hangups; disproportionate thinking; unhealthy obsessions; and so on.

These ailments are very debilitating and they are a major obstacle that sufferers face preventing them from leading a normal life. Resulting symptoms of these disorders include: problems with sleeping (insomnia); excessive sweating; irrational panicking; physical numbness; dizziness and nausea; heart palpitations; an inability to stay still and stay calm; painful muscle tensions and cramps; shortness of breath; and an inability to act or perform simple tasks.

Anxiety Disorders may either be developed through significant stressful incidents or situations in a sufferer’s life, or they may be hereditary. Thankfully, there are numerous therapies and medications that may help an individual treat and possibly rid themselves of their disorder.

Cannabis is a complex medicinal plant that may actually be used to treat a variety of debilitating symptoms caused by a surprisingly large number of ailments. It’s usefulness as a non-lethal medicine (you cannot die from an overdose of cannabis) cannot be overstated and it’s versatility in terms of how it can be consumed and as to how it can be useful for so many illnesses is something to be excited about. However, it is important to remember that consulting with your primary care physician should be your first priority when considering incorporating cannabis into one’s medical regiment and that cannabis is to be used as an adjunct therapy and not a replacement. It is also your responsibility to communicate with your doctor as to how your use of cannabis has affected your health and of your progress with utilizing medical cannabis.

Currently, much of the ongoing research regarding cannabis’ ability to help with reducing anxiety has been focused on the powerful anxiolytic (anti-anxiety and anti-panic) properties of Cannabidiol (CBD). Overall, exciting studies have shown that cannabis may be quite useful for treating individuals suffering from Anxiety Disorders for the following reasons: significantly reducing anxiety itself; helping to manage possible depression associated with the anxiety disorder; helping to reduce nausea during a panic attack; assisting with sleep should the anxiety disorder cause insomnia; and with preventing possible psychosis.

FINDINGS: EFFECTS OF CANNABIS ON ANXIETY DISORDERS
While tetrahydrocannabinol (THC) has shown to increase anxiety, both animal and human studies have shown that another major cannabinoid found in cannabis — cannabidiol (CBD) — possesses anxiolytic-like effects .

One study found that CBD significantly reduced anxiety, cognitive impairment and discomfort in social phobia patients before they were subjected to simulated public speaking. A similar study also found CBD to have an anxiolytic effect on individuals submitted to a simulated public speaking test. Another found CBD to significantly decrease subjective anxiety in individuals diagnosed with social anxiety disorder.

Cannabinoids have shown they can reverse stress-induced anxiety by inhibiting fatty acid amide hydrolase, the anandamide-degrading enzyme. This is likely due to cannabinoid interaction with cannabinoid receptors, particularly the CB2 receptor, as they have shown to inhibit the fatty acid amide hydrolase and reduce vulnerability to anxiety. One study found that it was through CBD’s activation of the cannabinoid receptors that provided an anxiolytic effect in stressed mice. Another study, however, showed that it was through CBD’s activation of 5-HT1A receptors that caused an anxiolytic-like effect in rats exposed to tests. In another, CBD’s action on limbic and paralimbic brain areas were shown to be responsible for its anxiolytic properties.

The cannabis plant offers a plethora of therapeutic benefits and contains cannabinoids and terpenoid compounds that are useful for treating some of the symptoms caused by an Anxiety Disorder. While much of the interest in treating an Anxiety Disorder with cannabis involves CBD, the following chart denotes which cannabinoids and terpenoids also work synergistically with each other for possible therapeutic benefit. 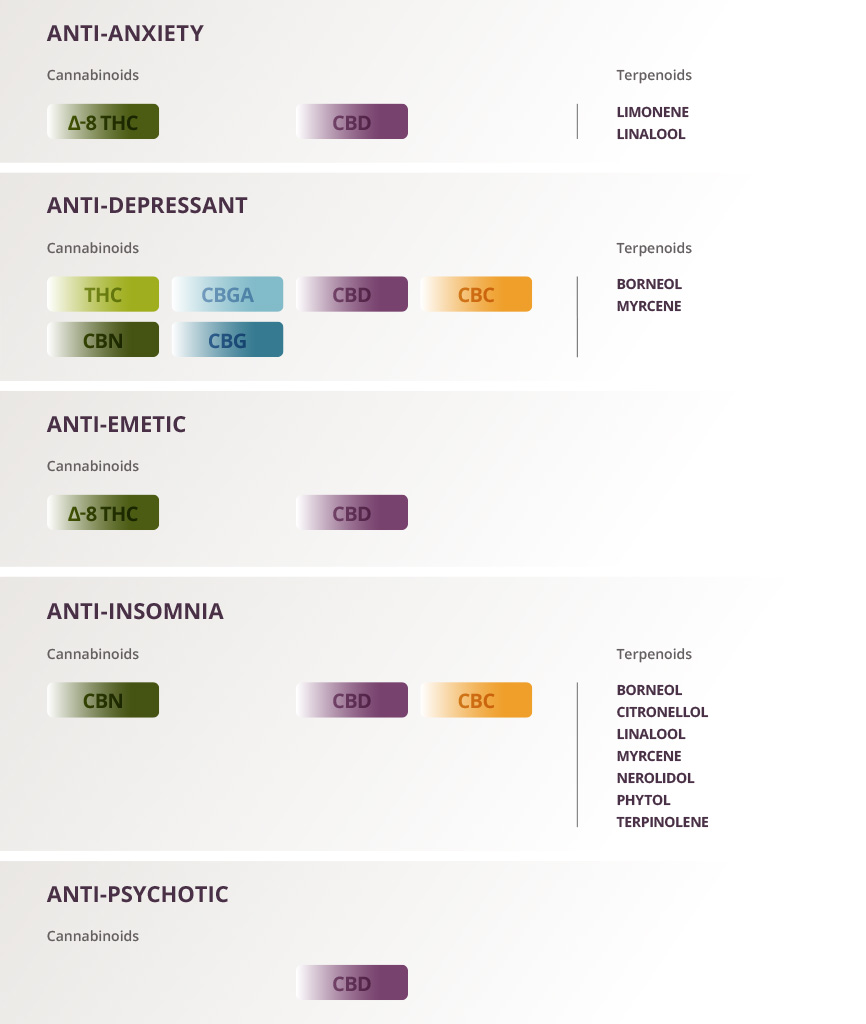 A Patient's Guide to Medical Cannabis


Article: "How to Qualify for Medical Cannabis in New Mexico"

Chapter 5 the endocannabinoid system as a target for novel anxiolytic and antidepressant drugs.Gaetani, Silvana, et al.

Effects of cannabinoids on the anxiety-like response in mice.Rutkowska, Maria, et al.

Cannabis and cannabis extracts: greater than the sum of their parts.McPartland, John M., et al.

Action of cannabidiol on the anxiety and other effects produced by ?9-THC in normal subjects.Zuardi, A.W., et al.

The efficacy and safety of nabilone (a synthetic cannabinoid) in the treatment of anxiety.Fabre, Louis F., et al.