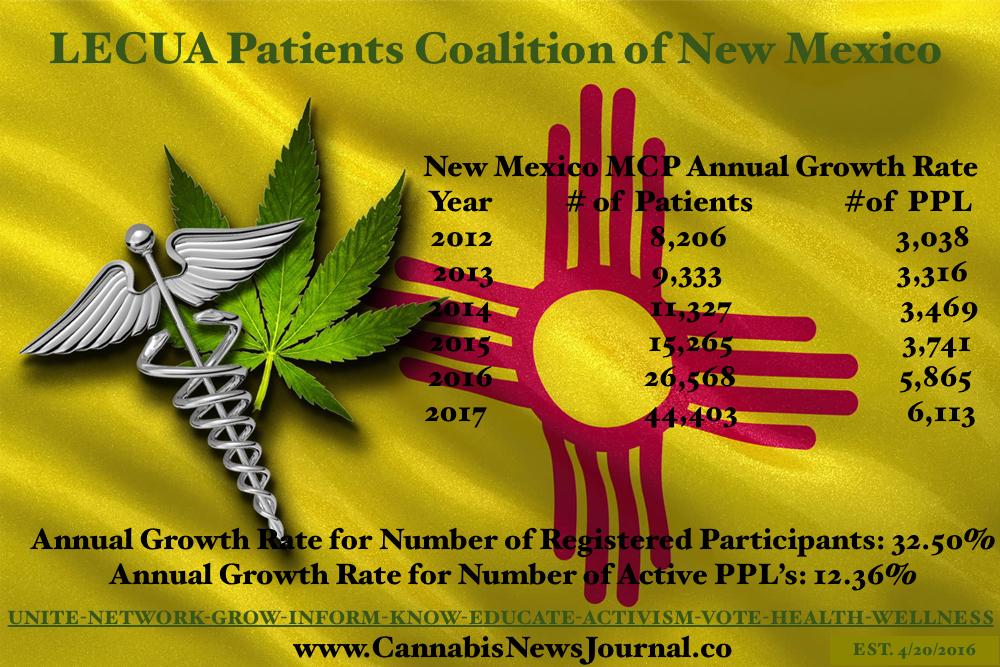 New Mexico Medical Cannabis Advisory Board Hearing Recommendations
The New Mexico Medical Cannabis Advisory Board Hearing that was held on, Friday November 3rd 2017, at the New Mexico Department of Health was the second meeting for 2017. The advisory board consists of eight practitioners representing the fields of neurology, pain management, medical oncology, psychiatry, infectious disease, family medicine and gynecology. The practitioners shall be nationally board-certified in their area of specialty and knowledgeable about the medical use of cannabis. The members are chosen for appointment by the Secretary of Health from a list proposed by the New Mexico Medical Society.


The Medical Cannabis Advisory Board (MCAB) Duties and Responsibilities according the medical cannabis program law, LECUA Act 2007: The advisory board shall convene at least twice per year to: review and recommend to the department for approval additional debilitating medical conditions that would benefit from the medical use of cannabis; recommend quantities of cannabis that are necessary to constitute an adequate supply for qualified patients and primary caregivers; accept and review petitions to add medical conditions, medical treatments or diseases to the list of debilitating medical conditions that qualify for the medical use of cannabis and all lawful privileges under the act and implementing rules; issue recommendations concerning rules to be promulgated for the issuance of registry identification cards; and review conditions previously reviewed by the board and approved by the secretary for the purpose of determining whether to recommend the revision of eligibility criteria for persons applying under those conditions or to review new medical and scientific evidence pertaining to currently approved conditions.


The agenda for the November 3rd 2017 public meeting included: Program Update by Mr. Vigil, Comments from MCAB Chair, Actions of Secretary Gallagher on the April Petitions, Old Business & Tabled Petitions, and the hearing of the November petitions. (Complete Meeting Agenda is at the end of the article in Appendix B.)


During the Medical Cannabis Program update by Program Manager Mr. Vigil, he said approximately 48,000 patients were enrolled as of September and it was mentioned again of the Department of Health’s plans to have a online application system created sometime in 2018 for program participants to then be able to do that process online as well as having the paper application option. Also during the first three quarters of 2017 the MCP office has continued to do a great job in maintaining a application processing time average of 20 days.  The program office continues to grow as well, with a new medical director & health educator now hired and plans to hire an environmental scientist very soon too.


Attached here is Secretary Gallagher’s full decision regarding the petitions submitted for the Medical Advisory Board Hearing on April 07, 2017.


During the 2017 Regular Legislative Session, state lawmakers made efforts to legislate a number of changes to the state’s Medical Cannabis Program with over 25 different pieces of legislation, one of the bills vetoed by Gov. Susana Martinez, was House Bill-527, on Friday-April 7th 2017 (same day as the medical cannabis advisory board meeting), saying she did so in part because she didn’t want to “eliminate an important responsibility of the Medical Cannabis Advisory Board.” Health Secretary Lynn Gallagher, who has the final word on changes to the state Medical Cannabis Program, hadn’t yet decided then whether to accept new conditions and petitions the board recommended.


That same Friday morning, on April 7th 2017, the Department of Health’s Medical Cannabis Advisory Board held a meeting exercising that important responsibility the Governor spoke of, that resulted in what is above.


Based on the statement made by the Governor of New Mexico in April 2017, the State should have followed and accepted all the April 2017 Petition Recommendations because of that important responsibility of the Medical Cannabis Advisory Board the governor spoke of.


For the Petitions that were heard on Friday, November 3rd 2017:


Opioid Petition was approved 5-0 and the interesting thing here is that the petitioner for this one said she was able to meet with Secretary Gallagher to discuss her petition, now this is not mentioned in the Petition Process as even being a option, and the LECUA Group Petitions were never once given that same equal opportunity to discuss those Petitions that had been turned in for both April and this most recent November meeting. The LECUA Patients Coalition of New Mexico will be asking Department of Health and MCAB members on Monday, why one petitioner was allowed to do this and why the other petitioner had not been given that same equal chance. Especially considering how the Secretary denied everyone of those April Petitions the the Doctors said we need to do for the patients...like Patient Collectives, Removing the Concentrate Cap and Increasing Adequate Supply. 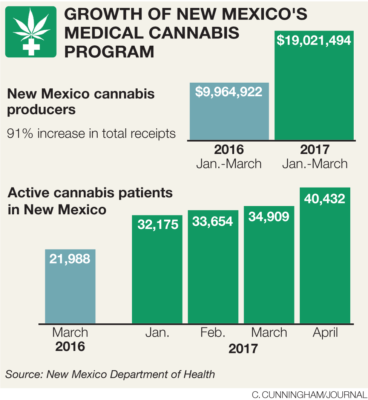 There was some excellent public comments made during the meeting as well;
There was a lot of great comments in support of all the petitions as they were reviewed by the Medical Cannabis Advisory Board.
Two people in attendance stated that the Department of Health needs to License more new program producers in increase safe access to the rural areas.
Bryan Krumm point out in how the Secretary and the State are indeed practicing medicine without a medical license and the liability the state is in by doing this. (Bryan Krumm is a Psychiatric Nurse Practitioner in Albuquerque with over a quarter century of psychiatric experience.  He is one of the country’s leading experts on alternative treatments for psychiatric disorders.)
A representative from a State Lab that test medical cannabis in the program mentioned how they had done a test on a medical cannabis product and this product had failed the Microbiological Contaminants testing they did, these failed test results were then entered in the BioTrackTHC Computer System. Then the State Lab went back into BioTrackTHC to check the entered failed test result - It had been deleted out of BioTrackTHC by an unknown user from another location...this is extremely concerning as it exposes two major issues: 1) Unauthorized Access (A Security Hack into BioTrack that also has patient information) and 2) that medical cannabis that failed the Microbiological Contaminants test was also sold to patients by a Dispensary…


Department then has final determination: The department shall notify the petitioner within 10 days of the secretary’s determination. A denial by the secretary regarding the inclusion of a medical conditions, medical treatments or diseases to the existing list of debilitating medical conditions contained under the act shall not represent a permanent denial by the department. Any individual or association of individuals may upon good cause re-petition the advisory board. All requests shall present new supporting findings of fact, or scientific conclusions of credible medical evidence not previously examined by the advisory board.


The entire meeting was been recorded for audio and the audio recording was not available at the time this was written. Once the Audio Recording is released to the public it will be updated at a later date.


Department of Health spokesman Paul Rhien responded to The New Mexican’s inquiries about Gallagher’s lack of participation on her behalf with the following emailed statement:“As always, the Secretary will seriously consider the advice of the board and will continue to make medical science and data-driven decisions regarding the Medical Cannabis Program. The Department will continue to responsibly administer the program and make sure that patients receive the most medically-appropriate treatment for their medical conditions in a way that doesn’t compromise their already vulnerable health.”“On background,” Rhien wrote: “Historically secretaries have not actively participated in the board meetings.” 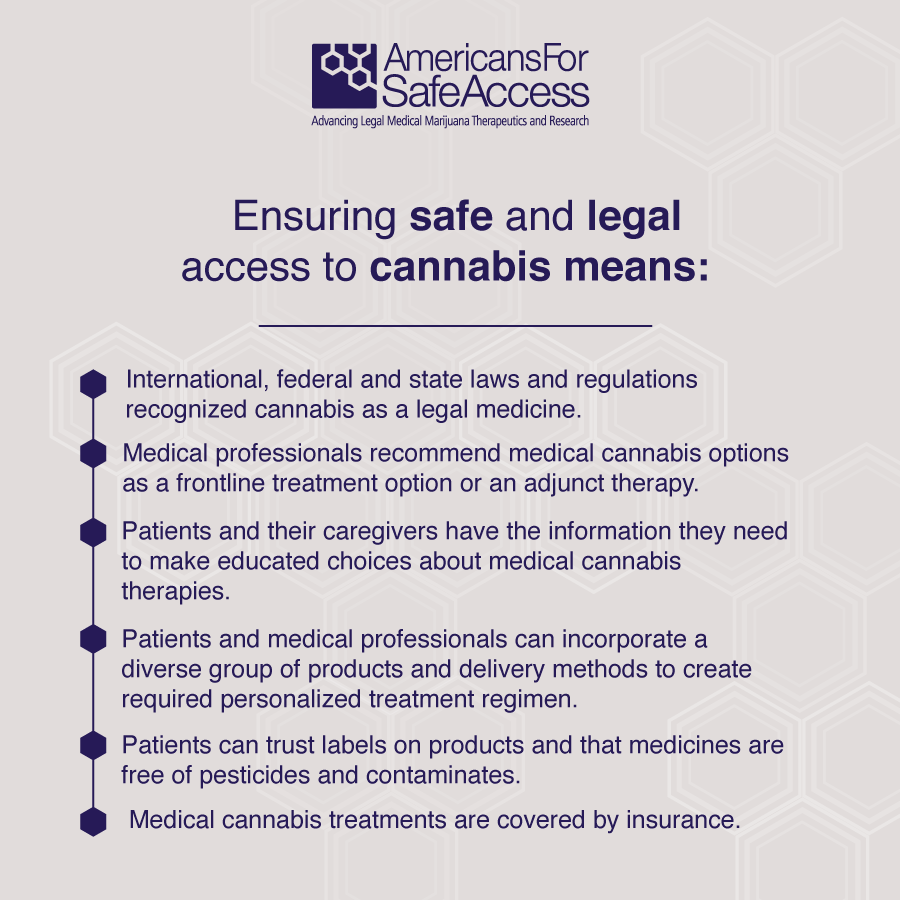 
G. Petitions presented that will not be heard at this meeting as they are beyond the scope of the Medical Advisory Board
2017-29 LNPP Plant Count Increase
2017-31 Medical Cannabis Registry Cards Presumptive Eligibility and Qualified Patients to reapply every three years for registry identification card
2017-32 Seeks to change Part B Line 8 Section 3, definitions as used in the Lynn and Erin Compassionate Use Act
2017-34 Medical Cannabis Program research and MCP Certification and Education Standards established for State Industry Employment 2017-35 Increase in MCAB Membership
2017-36 Adding Veteran Status as a medical condition