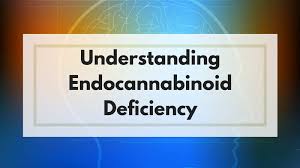 Sure, we know cannabis has proven helpful in relieving symptoms associated with cancer, epilepsy and glaucoma. But did you know, more and more evidence has been recorded that cannabis is more than beneficial, we actually need it?Since the discovery of the endocannabinoid system (ECS) and various phytocannabinoids beyond just tetrahydrocannabinol (THC), it seems that a sort of “shift” occurred in how we approach cannabis. “Clinical endocannabinoid deficiency” – sometimes (and less accurately) called “clinical cannabinoid deficiency – is actually an umbrella term for various conditions, in particular:-Migraine-Fibromyalgia-Irritable Bowel Syndrome (IBS)-Other treatment-resistant conditions that could be alleviated by cannabis use
Essentially, a CECD means “a lack of endocannabinoids”. The solution? Phytocannabinoids, which are found in abundance in cannabis. To state simply, a lack of cannabinoids could explain why conditions like migraine, fibromyalgia and IBS arise, and why people suffering from these conditions find cannabis to be therapeutic.Now, there are a lot of conditions that could be linked to a CECD. This is perhaps because of the ECS’s intimate relationship with homeostasis (the balance of the body’s physiological processes), and there is still the chicken-or-egg question of “do these conditions arise because of a CECD, or does suffering from, say, multiple sclerosis or persistent headaches eventually cause a CECD?” The answer is likely to be “both”, and it could be one of the key reasons why cannabis is so useful for so many conditions.The CECD concept comes from Dr. Ethan Russo, who is a leading researcher on cannabidiol (CBD) and was involved in the development of GW Pharmaceutical’s Epidiolex – a CBD extract for epilepsy, and currently at Stage 3 development in the US. To see more of his work, check out the following links:The original 2004 paper, which states:“Migraine, fibromyalgia, IBS and related conditions display common clinical, biochemical and pathophysiological patterns that suggest an underlying clinical endocannabinoid deficiency that may be suitably treated with cannabinoid medicines.” However, the lack of evidence at the time made it just an “educated guess based upon some observable data and experimentation”.As stated earlier, the evidence is mounting. Neurologist and Medical Scientist Ethan Russo is at the spearhead of this research. In this video he explains the concept of CECD and the importance of CBD. In 2016 Ethan Russo updated his findings in a peer reviewed journal that can be found here.The abstract to Russo’s article states:“Currently, however, statistically significant differences in cerebrospinal fluid anandamide levels have been documented in migraines, and advanced imaging studies have demonstrated ECS hypofunction in post-traumatic stress disorder. Additional studies have provided a firmer foundation for the theory, while clinical data have also produced evidence for decreased pain, improved sleep, and other benefits to cannabinoid treatment and adjunctive lifestyle approaches affecting the ECS.”In a 2014 review published in the US National Library of Medicine journal, Scientists S.C. Smith and M.S. Wagner backed up Russo’s theories. The pair wrote, “…subsequent research has confirmed that underlying endocannabinoid deficiencies indeed play a role in migraine, fibromyalgia, irritable bowel syndrome and a growing list of other medical conditions. Clinical experience is bearing this out. Further research and especially clinical trials will further demonstrate the usefulness of medical cannabis. As legal barriers fall and scientific bias fades this will become more apparent.”Can You Simplify This Further but With More Details, Doc?Sure can! There are two main endocannabinoids that you should know about. They are:Anandamide (C22H37NO2) – the body’s “joy” chemical. Anandamide is a fatty acid neurotransmitter, and is converted into ethanolamine (a primary amine and primary alcohol) and arachidonic acid (AA – a polyunsaturated omega-6 fatty acid) by the enzyme fatty acid amide hydrolase (FAAH). Anandamide’s effects can occur in either the central or peripheral nervous system (CNS or PNS), and its effects are mediated by CB1 cannabinoid receptors in the CNS and CB2 cannabinoid receptors in the PNS. Anandamide is the “naturally occurring THC”.2-Arachidonoylglycerol (2-AG, C23H38O4) – an endogenous agonist (a chemical that binds to a receptor and activates it in order to induce a response) of the CB1 receptor. It is an ester formed from arachidonic acid (see above) and glycerol, and is found in high levels in the CNS. 2-AG’s activities are mediated by the enzymes phospholipase C (PLC) and diacylglycerol lipase (DAGL).As you may have noticed, THC is the main phytocannabinoid that affects the cannabinoid receptors 1 and 2. The relationship between THC and anandamide, and why THC may help beat nausea (antiemetic) and muscle spasms. Anandamide also has a role to play in mood regulation and memory, which is why THC can affect memory as well as potentially help with post-traumatic stress syndrome and anxiety-related conditions. 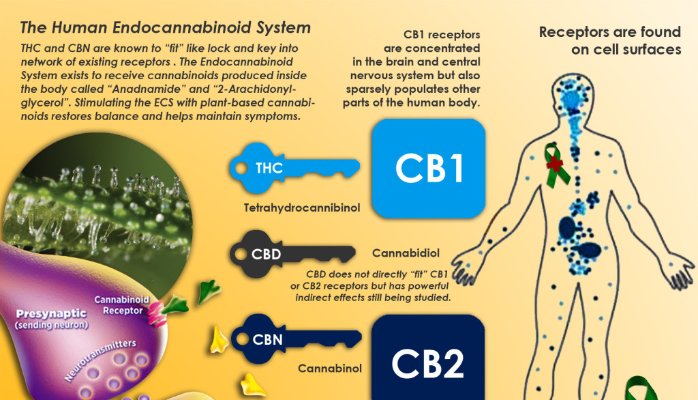 CB1 receptors are found mostly in the CNS, and in smaller numbers in the liver, kidneys and lungs. CB2 receptors are found in the immune system and blood cells. CB2 receptors may play a role in inflammation, pain sensation and immune responses, and could also play a role in liver, kidney and neurodegenerative diseases.Where Does CBD Fit Into All of This?CBD doesn’t affect the CB1 and CB2 receptors directly. Rather, CBD activates other receptors, like the vanilloid, adenosine and serotonin receptors. To give some examples:Transient Receptor Potential Cation Channel Subfamily V member 1 (TRPV1) – some people may recognise this protein being mentioned on articles surrounding Cannabis Hyperemesis Syndrome (CHS). This is because it is also known as the “capsaicin receptor”, or “vanilloid receptor 1”. This receptor plays a part in the mediation of inflammation, pain perception and body temperature, and CBD can help modulate this. CBD’s effects on TRPV1 may also be why it works as an anticonvulsant and control epileptic seizures. TRPV1 may be involved with the onset and progression of some forms of epilepsy (e.g. Dravet syndrome). 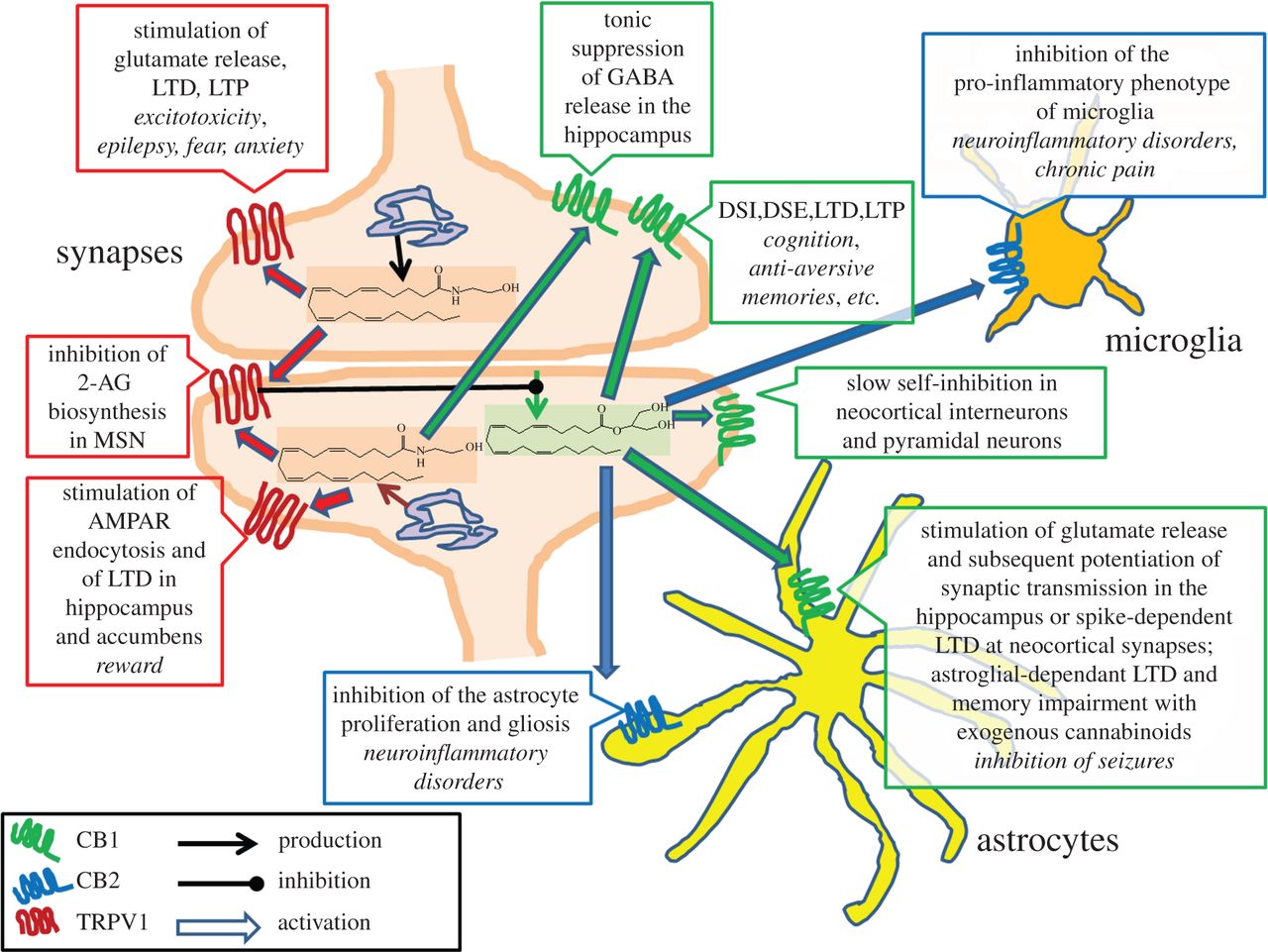 Adenosine A1 Receptor – CBD’s effects on this receptor suggests it may have an effect on regulating the heartbeat, exerting an antiarrhythmic effect. CBD’s effects on the A1 and A2 receptors have also been reported to have anti-inflammatory effects. Adenosine receptors also play a role in the release of the neurotransmitters dopamine and glutamate, which is why CBD may help treat schizophrenia treatment and other neurological conditions like dementia. CBD’s effects on dopamine may also be one reason why cannabis can be used for drug addiction. 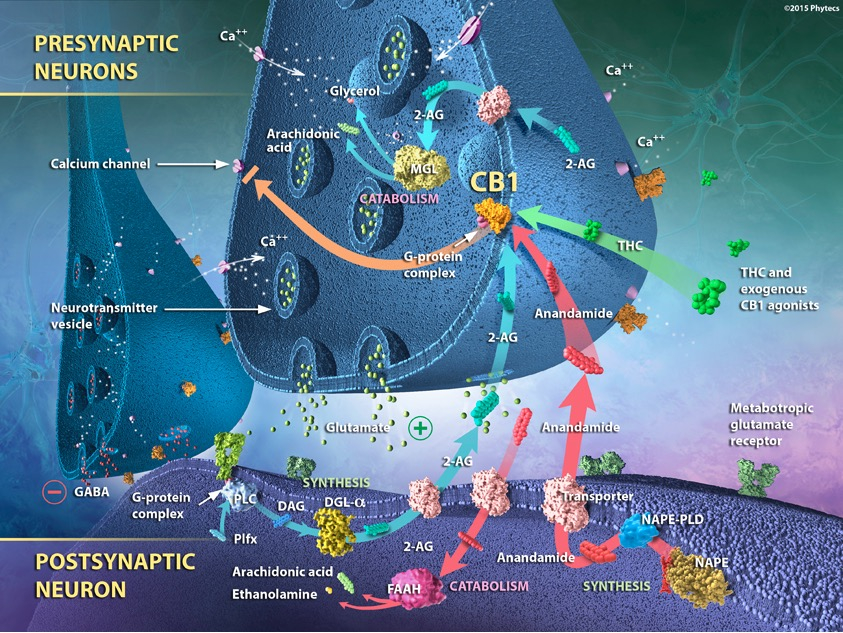 5-Hydroxytryptamine receptor, subtype 1A (5HT1A) – a receptor that binds the endogenous neurotransmitter serotonin. CBD’s effects on this receptor suggest why it may function as an antidepressant and anxiolytic (anti-anxiety medication) for many people, and also why it may help as a painkiller – remember, SSRIs are also prescribed for chronic pain. 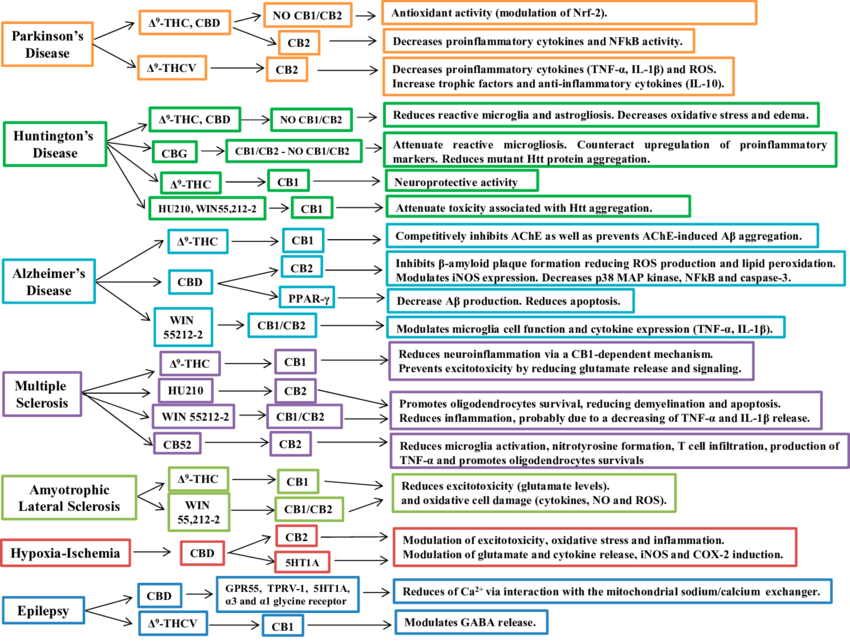 Furthermore, CBD inhibits the FAAH enzyme, which breaks down anandamide and affects the CB1 receptor (see above). This means that it can be used to “modulate” THC’s psychoactive effects, whilst the THC can help CBD do its job better. Indeed, there are some interesting studies taking place at California Pacific Medical Center, where specific concentrations of THC and CBD injected into breast and brain tumors eliminates those tumors completely, in 30 days! Exciting stuff!Can a Person Have an “Overabundance” of Endocannabinoids? “Cannabinoid Abundance Syndrome” (“CAS”)?Yes, this is also a theoretical possibility. In fact, it could be said that CHS is an overabundance of endocannabinoids, caused by the “build up” of phytocannabinoids over time, and thereby inducing nausea, vomiting and generally exerting negative effects on the TRPV1 receptor. Yes, this means that cannabis can “switch” from antiemetic to emetic! To confuse you even more, cannabis can potentially help treat cyclical vomiting syndrome (CVS), a condition that resembles CHS!However, could it be said that there are conditions out there that are caused by having too many endocannabinoids, rather than too few? Could having too many cannabinoids, or even too many of some and a deficiency of others, explain why some people have negative reactions to cannabis, or why some strains have positive effect whereas others have a negative effect? This doesn’t seem all too crazy a supposition.However, what conditions could be caused by by having too many cannabinoids, other than possibly CHS (which is rare)? Possibly, and it might help explain why, rather than dull pain, THC may heighten pain sensitivity for some long-term medical cannabis users. Although whether this is because medical cannabis users were more intolerant of pain in general is up for debate!


There isn’t much research on the opposite of CECD, but there may be some conditions that merit a “CAS” label. Could schizophrenia be said to be caused by having too much anandamide, hence why CBD may be useful as an antipsychotic? Whilst cannabis could be helpful for some people suffering from cluster headaches, it may actually make others feel worse. Could some kinds of cluster headaches be caused by having too many cannabinoids, whereas migraines and some other kinds are caused by a CECD?Whatever the answers to these questions are, of this there is no doubt: the discovery of the ECS and various phytocannabinoids has revolutionized our understanding of the human body, and knowing more about it could provide us with some novel solutions to beating conditions ranging from chronic brain damage to autism to garden-variety headaches! And this is without even getting into terpenoids, which have effects of their own, and may also have an influence on the entourage effect. - CANNABIS CULTURE
at September 09, 2017