Hemp Farming In The US And Why Hemp Was Banned

This is Part One in a Four Part Series on the corruption that lead to Cannabis and Hemp Prohibition
Part 2: The Final Assault Leading To The Marihuana Tax Act Of 1937 (click to read)
Part 3: The Entourage Of Rockefeller’s Effect On Cannabis And Hemp Prohibition
Part Four: The Flexner Report Of 1910 And Maldevelopment In The Structure Of Medical Education In America


For thousands of years industrial hemp was a common staple used throughout the world. Almost as soon as settlers came to the US, Hemp was being used. Hemp provided food for the settlers and fed their livestock, thus becoming part of the food supply.  Farmers fed it to all kinds of livestock.  The fibers from the hemp plant clothed us, were used to build housing, we sailed our ships with hemp rope and sails made of hemp, it was part of our livelihood as Americans when we became Americans.

In 1619, because hemp was such an important resource for the settlers, it was illegal not to grow hemp in Jamestown, Virginia. Massachusetts and Connecticut had similar laws. During the 1700's, subsidies and bounties were granted in Virginia, Pennsylvania, New York, New Jersey, North & South Carolina, and the New England states to encourage hemp cultivation and the manufacturing of cordage and canvas.

More than 120,000 pounds of hemp fiber was needed to rig the 44-gun USS Constitution, America’s oldest Navy ship affectionately called “Old Ironsides.” Nearly 55 tons of fiber was needed for the lines and rigging on that vessel alone. Even more hemp fiber went into making canvas for sails and caulking for the wooden hull. (Fun Fact: The word "canvas" is derived from "cannabis".)
Where did all of that hemp fiber come from? It came from the cannabis sativa fields of patriotic Revolutionary War-era farmers who originally grew the fibrous crop for the British Crown. Strong fibers formed strong nations in the pre-industrial age, and hemp was strategically important during the Revolutionary War.

Hemp fiber was so important to the young Republic that farmers were compelled by patriotic duty to grow it, and were allowed to pay taxes with it. George Washington grew hemp and encouraged all citizens to sow hemp widely. Thomas Jefferson bred improved hemp varieties, and invented a special brake for crushing the plant’s stems during fiber processing.

From 1600-1890s: Domestic production of hemp was greatly encouraged.-American production of hemp was encouraged by the government in the 17th century for the production of rope, sails, and clothing.-In 1619 the Virginia Assembly passed legislation requiring every farmer to grow hemp.
-Hemp was allowed to be exchanged as legal tender in Pennsylvania, Virginia, and Maryland.-Domestic production flourished until after the Civil War, when imports and other domestic materials replaced hemp for many purposes.
-In the late nineteenth century, marijuana became a popular ingredient in many medicinal products and was sold openly in public pharmacies.-During the 19th century, hashish use became a fad in France and also, to some extent, in the U.S.

Unfortunately, these actions failed to establish a permanent hemp industry in any of these states. Then, in the early 1900s, it was banned and pushed aside.

The Shely Fiber Breaker (Scientific American, June 25, 1892) "Designed to break six to eight thousand pounds of hemp or similar fiber per day. Takes up to nine people to assist with processing."

Why Did Hemp Get Stamped As An Illegal Plant?

Around the turn of the 20th century companies like DuPont created chemicals that were used in processing of paper; DuPont also created chemicals used for pesticides, herbicides and fertilizers, which were used extensively by the cotton industry (cotton is MUCH more chemical and water intensive compared to hemp). While this was going on, William Randolph Hearst invested in timber and mills to produce the paper for his newspaper, which was the largest chain in the U.S. at the time. His investments in the timber industry were backed by Mellon Bank. Just as Jack Herer's book The Emperor Wears No Clothes mentions but there is also the racial and greed components as well.

The current U.S. Secretary of the Treasury at that time was Andrew Mellon, who happened to own Mellon Bank (and was one of the backers for DuPont as well). Mellon’s niece was married to Harry Anslinger who, incidentally, was connected to the alcohol prohibition campaign. He was out of a job (as were everyone else in that sector of the federal government) after the alcohol prohibition ended. To keep his family employed, Mellon created a new division of the federal government, the Bureau of Narcotics (this is now the Drug Enforcement Agency -DEA), and made Harry Anslinger the new head of that program.Also during this time machinery was being developed to make hemp processing easier and more efficient. This was a threat to the paper, chemical, timber, and petroleum industries. Pharmaceutical companies were creating new medicines and drugs and were also threatened by the natural healing properties of the plant we know as hemp.

America in the 1900's saw two powerful rivals, agriculture and industry, facing off over several multi-billion dollar markets. When Rudolf Diesel produced his diesel engine in 1896, he'd intended for it to run off of vegetable and seed oils, specifically hemp, which is superior to petroleum. A fuel that can be grown by our farmers that is superior to foreign oil. Mr. Diesel was found dead, floating in the ocean in 1913. His death was ruled a suicide.

Now Harry Anslinger knew he couldn’t let this happen in order to protect investments of his wealthy friends so he then began looking into rumors of the Mexican population smoking the flowers of the hemp plant. Racism was quite rampant at that time, Anslinger played on this racism and used the Mexican slang, “marijuana”, in place of the word ‘hemp’ to begin his campaign of propaganda and lies. And a very good reason why “marijuana” used as a term for the plant should not be used but rather cannabis, it’s true name,  in its place. Anslinger spread lies and rumors about blacks from Africa and Mexicans of the Southwest becoming violent while smoking it and how they raped white christian women and also labeled it as a dangerous narcotic.Hearst’s newspapers spread the slander and propagated stories about the ‘evil marijuana’ and of people committing these rapes and murders while ‘under the influence’ of ‘marijuana'. This, of course, had the papers selling like wildfire, but the papers always failed to mention the current everyday uses of the hemp for rope, fuel, textiles, livestock feed, and food.After the 1937 Marijuana Tax Act was passed, Harry Anslinger ordered the hemp prohibition, using the excuse that his agents wouldn’t be able to tell the difference between hemp and marijuana, and that the farming of hemp made it too difficult to enforce the marijuana prohibition.

In that same year, of 1937, DuPont filed its patent on Nylon, a synthetic fiber that took over many of the textile and cordage markets that would have gone to hemp. More than half the American cars on the road were built by GM, which guaranteed DuPont a captive market for paints, varnishes, plastics, and rubber, all which could have been made from hemp. Furthermore, all GM cars would subsequently be designed to use tetraethyl leaded fuel exclusively, which contained additives that DuPont manufactured.  Aspirin made by Bayer along with the use and sales of opioid based medicines both saw immediate financial benefits as well as the investors and company owners, from the Marijuana Tax Act of 1937. 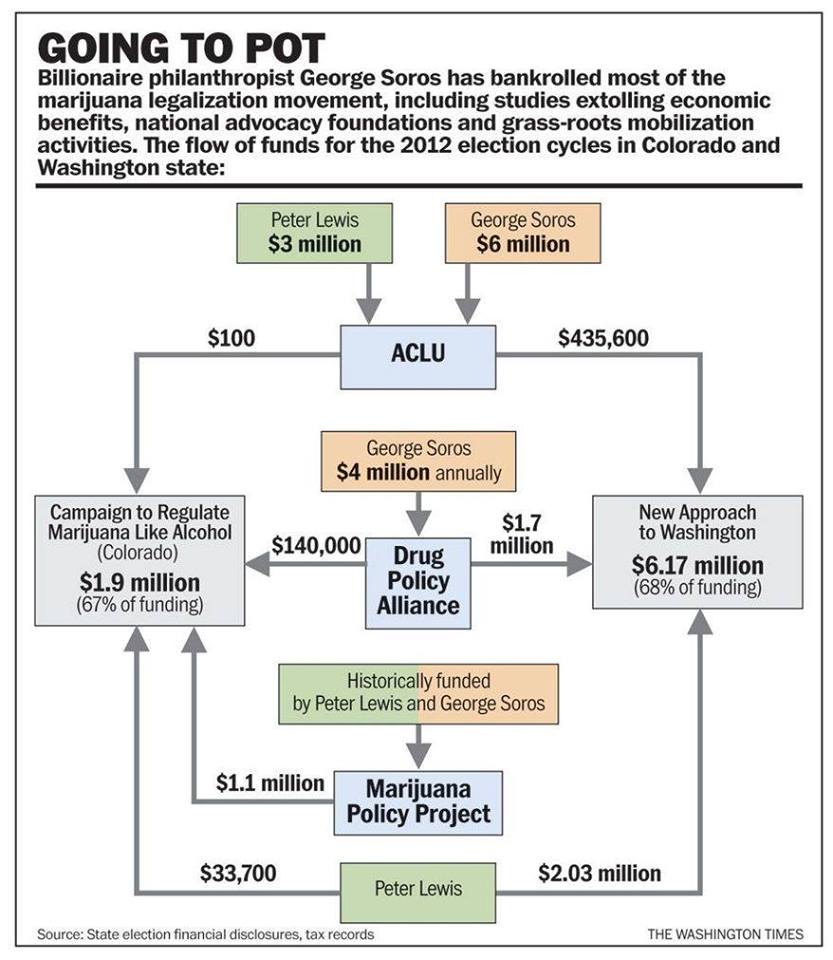 Fast Forward back to 2017, where we have Bayer, Monsanto, DuPont, Dow Chemical, and Syngenta trying to merge into the biggest farm-business oligopoly in history. And then we have the huge push for legalization from funding provided by George Soros, who is involved with all the above companies, thru national groups like Drug Policy Alliance and Marijuana Policy Project.
We pick back up 1942, when the hemp prohibition was put on hold to allow farmers to grow hemp to provide the needed fibers to aid in the war effort against Nazi Germany and Hitler. After the war, when the hemp was no longer needed, the Air Force and Marines were ordered to destroy all remaining hemp crops.  And what was George Soros up to during World War II, helping Hitler and the Nazis confiscate the wealth and belongings of his fellow Jews. Telling CBS 60 Minutes program back in 1998, he feels no guilt, regret, or remorse about being a Holocaust helper, because, as he put it, if the hadn’t done it “somebody else would be taking it away anyhow.”It’s time to let one of nature’s perfect plants flourish again. Hemp will greatly cut the American dependence on foreign oil. Hemp can help the US return to natural, plant-based remedies for illnesses and diseases.  Hemp can help replace petroleum based plastics, thus making us less dependent on chemicals that are harming the environment and people's health.Hemp = New Mexico’s Solution For A Legislative Special Session

The state has the renewable resources to potentially provide 1,000 times more clean energy than the Public Service Company of New Mexico’s current demand, according to the state Energy Conservation and Management Division.

The state of New Mexico should legalize hemp to first and foremost start paying the state legislators. Establishing and creating a Hemp industry in the state of New Mexico could generate more money for the state compared to the legalization of cannabis for adult use.  Allowing for a hybrid state legislature: Meeting for most of the year and pays the legislators as full-time employees. They can serve the constituents much better because of their extended time in office and ability to devote more time to each issue.

New Mexico is the only state with a unsalaried legislature. And look where we find our selves Ranked in many national polls compared to other states...we do not belong at the bottom of these lists.

Some lawmakers such as Democratic Rep. Antonio Maestas say a salary would increase the pool of talent to fill the seats.  Maestas says few people can afford to serve in a citizen Legislature.  Political Action Committee’s growth and influence in New Mexico politics has more than doubled in the last 10 years.  All the larger municipalities and counties in New Mexico provide salaries for city councilors and county commissioners.

States have a paid rather than volunteer fire departments, law enforcement, health-care workers, and teachers, to name a few. The reason is that we rightly expect increased reliability, productivity, and professionalism when we pay for services as opposed to them being provided voluntarily.

Providing funding for a paid legislature and state budget reform can be achieved with hemp legalization; in conjunction with the utilization of solar, wind, and geothermal energy sources. Hemp is refined into products such as hemp seed foods, hemp oil medicine, wax, resin/plastics, rope, cloth, pulp, paper, and fuel. This will create jobs, has vast potential for the state universities to benefit, and creates a new business market to keep college graduates in New Mexico.
at May 18, 2017