Cannabis on tribal lands has always been a complicated issue. In short, tribes have leeway to legalize cannabis under sovereignty, but sometimes those tribal lands are in states that have not done so. Tribal sovereignty refers to tribes' right to govern themselves, define their own membership, manage tribal property, and regulate tribal business and domestic relations; it further recognizes the existence of a government-to-government relationship between such tribes and the federal government. New Mexico State Senator Benny Shendo, Jr has introduced Senate Bill 345: “Medical Marijuana Tribal Agreements”.
“AN ACTRELATING TO HEALTH; REQUIRING THE DEPARTMENT OF HEALTH TO ENTERINTO INTERGOVERNMENTAL AGREEMENTS WITH NEW MEXICO INDIANNATIONS, TRIBES AND PUEBLOS THAT PARTICIPATE IN THE STATE'SMEDICAL CANNABIS PROGRAM.”

States that have legalized cannabis for adult use that also have tribal lands are: California, Colorado, Maine,  Oregon, Nevada, and Washington.  States with medical cannabis laws and tribal lands are: Alaska, Arizona, Arkansas, Florida, Illinois, Michigan, Minnesota, New Mexico, New York, North Dakota, Ohio, and Montana. While there was a flurry of excitement around the business opportunities across the country in 2015, most of those plans were too bold.  Instead, during 2016, a small number of tribes within states that have existing legal cannabis frameworks have slowly and quietly rolled out their plans.

Those who live on Native American lands, governed by sovereign tribal governments, are subject to rules and regulations different from those who live on non-reservation land. Reservation casinos flourish in states where gambling is prohibited, for example.
In October 2014, the Department of Justice director Monty Wilkinson released a memo in response to questions about the Controlled Substances Act as it relates to Native American lands. The Wilkinson memo pointed to the Cole memo, which outlined eight priorities for how limited justice department resources could be best spent on cannabis-related crimes.
“The eight priorities in the Cole Memorandum will guide United States Attorneys’ marijuana enforcement efforts in Indian Country, including in the event that sovereign Indian Nations seek to legalize the cultivation or use of marijuana in Indian Country,” the Wilkinson memo read.
Considering the Cole Memorandum applies to states like Colorado and Washington, which legalized and regulated cannabis since 2012 without federal interference, this memo says that the DOJ should also take a similarly hands-off approach to tribal lands.
So far, several tribes have indicated that they might want to legalize cannabis and a few have done so. This adds a layer of confusion to the patchwork of cannabis laws across the country; not only are there different stances on cannabis among states, but now there will be different stances within states if more tribal nations want to cultivate, consume and sell cannabis on reservation land in states where cannabis is strictly prohibited. 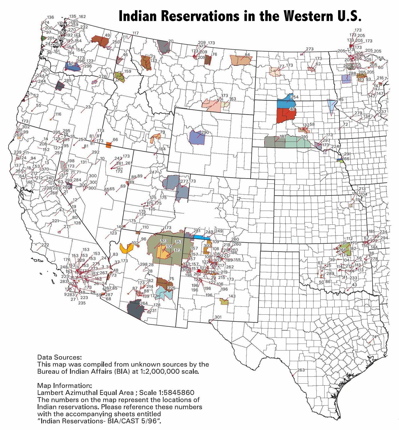 Here’s a list of some changes & plans for cannabis and hemp on tribal lands:
Flandreau Santee Sioux (South Dakota): this tribe, perhaps the most outspoken, proclaimed in September 2015 their desire to build the nation’s first cannabis resort, described by the tribe’s president as “an adult playground.” The plan had been in the works for months before the announcement. Then, in November that year, the tribe destroyed their crop and announced they would put their plan on hold. This came after a raid on another tribe’s land…
The Menominee Indian Tribe (Wisconsin): in 2015, the feds raided a farm on the Menominee Indian reservation in Wisconsin and eradicated 30,000 cannabis plants planted for hemp research. The feds contend they contained THC levels above those allowable for hemp. The tribe lost a lawsuit with the federal judge saying that because Wisconsin hasn’t legalized marijuana, the tribe couldn’t grow it within state borders.
Seneca Nation (New York): voted to legalize medical cannabis.
The Passamaquoddy Tribe (Maine): has obtained a permit to cultivate industrial hemp in Maine. Quoddy Hemp Manufacturing LLC spokeswoman Diana Nelson told the Press Herald the company “has obtained seeds from Kentucky and the Passamaquoddy Tribe is researching what kinds of hemp might grow best in northern New England.”
The Paiute Tribe (Nevada): wants to open a medical cannabis business. According to an article in lasvegasnow.com, the Las Vegas Paiute Tribe started moving forward with the plan to build two medical marijuana dispensaries, three greenhouses larger than football fields, a warehouse for storage, and a production building to formulate the products. The cost to build these facilities is about $5 million. The Paiutes partnered with Ultra Health, a company that has also approached 20 other tribes in total out West with no additional partnerships established.
The Eastern Band of Cherokee Indians (North Carolina): are exploring whether to legalize cannabis.
Shoshone Tribe (Oregon): The Fort McDermitt Paiute and Shoshone Tribe of Nevada and Oregon have planned to grow cannabis on its reservation to be used solely in the production of medical cannabis, the tribe’s chairman told KNPR’s State of Nevada. The facility is to be located some 40 miles from the Oregon border on the 35,000 acre Fort McDermitt Indian Reservation, which is located along the border in Humboldt County, NV, and Malheur County, OR.
Suquamish Tribe (Washington): obtained the first compact in which the state has explicitly allowed the tribe to legalize cannabis and is working with them on regulations.
The Squaxin Island Tribe (Washington): Squaxin Island Tribe’s reservation in Mason County, about fifteen miles northwest of Olympia, Washington own’s Elevation, the first tribal-owned-and-operated adult (recreational) use cannabis store in the country on a reservation.
In Washington State, the Puyallup became the third tribe to sign a compact with the state in January, though, this time, it only allows for a cannabis testing facility. Two tribes previously on the fence are now exploring their cannabis business options: the Quinault and the Jamestown S’Klallam.
The Yakima Nation of Washington banned marijuana on the reservation. It is also trying to block applications for marijuana businesses on 12 million acres the tribe is entitled to use for hunting and fishing.
The Omaha Tribe (Nebraska): voted to look into legalizing medical and non-medical cannabis. The Omaha Tribe has been looking into industrial hemp as well.
The Navajo Tribe: signed a resolution to grow industrial hemp on tribal lands, another step undermining federal prohibition in effect. According to a report published in Forbes, the Navajo will work with CannaNative to develop industrial hemp farming. The organization assists tribes in developing hemp and cannabis-based economies on Native American lands throughout the United States. The Navajo Tribal lands cover parts of New Mexico, Utah and Arizona. The farm where they plan to begin industrial hemp production is in New Mexico. Legalization of industrial hemp in New Mexico would help facilitate tribal plans. They can proceed with or without state legalization, but eliminating a layer of state laws would certainly make the path toward developing a hemp economy smoother.
Warm Springs Ventures (Warm Springs, Oregon): The company, established by the Confederated Tribes of Warm Springs council in 2001 to explore business opportunities for the reservation, envisions a tribal economy powered by new engines of commerce — first among them cannabis. Most observers agree that Warm Springs is poised to be a leader in Indian cannabis growing. The project, which will employ about 85 and generate between $11 million and $27 million annually. But the reservation provides plenty of land, sunshine, water and on-rez hydroelectric power — the perfect ingredients for growing pot. Its sovereign nation status, coupled with the state’s legalization of cannabis, represents a powerful political one-two punch.

Alongside the formation of organizations like the National Indian Cannabis Coalition, the first tribal cannabis business conference occurred at the Tulalip Resort Casino on the Tulalip reservation in Washington State, where more than 400 people representing 75 tribes discussed jurisdictional issues of possession and usage, the cultural and economic ramifications of cannabis legalization, and the possibility of forming a tribal business alliance.

Cannabis related sponsorships have also developed in the last year for some tribal events, most notably is one for the Gathering of Nations Pow Wow. The Gathering of Nations is one of the largest pow wow’s in the United States. It is held annually the fourth weekend in April, in Albuquerque, New Mexico. Over 500 tribes from around the United States and Canada travel to Albuquerque to participate. Ultra Health, a cannabis industry turnkey with operations in Nevada and New Mexico, has become the title sponsor for the Gathering of Nations Pow wow for 2017, raising concerns with some natives. Deborah White Plume, whose husband, Alex White Plume has been an advocate for the growing of hemp for decades, says she has mixed emotions about the sponsorship. ICMN reported that, White Plume says she supports the use of medical marijuana as well as the sponsorship, yet is disappointed by Ultra Health’s name on the Gathering of Nations.“First of all I am curious what the organizers get for sponsorship. But ultimately though I use medical marijuana, I feel this is an exploitative and corporatizing of Native people. I think it would be friendly and respectful if Ultra Health took their name off of the event name, otherwise it is just another exploitative and oppressive gesture to the red nation.”

THC-Education (Tribal Hemp & Cannabis Education)  was created and designed to provide the Tribal community with information on hemp and cannabis related business and to learn about the history of the plant species. One of the most crucial aspects at this point is education. Before a Tribe can move forward, they must have a full understanding of the legal, economic, employment, and social benefits & detriments of developing a business. Tribes should be asking themselves why have some been singled out with raids for bringing seeds across state lines? And how reputable are some of these big money companies approaching them for their land?

Whether or not Tribes should engage in medical marijuana industry is not the only consideration, a broader scope of opportunities and issues are not being addressed and are yet widely known. Tribal regulatory codes are a top priority and must include a specific set of subjects. Native Workplace Inc is a Native operated non-profit organization created in 2002 with the objective to educate the community on Green careers and work they with Tribes to provide strategic workforce development and tribal planning for the industry.

Tribes growing and selling cannabis on reservations may not have to pay local taxes or state taxes. This opportunity opens up a very lucrative business, also providing the medical benefits of cannabis to the tribes, and the ability to provide jobs for tribal members. There is precedent. In key ways, the move to grow cannabis in Indian country mirrors the movement to legalize gaming on Indian reservations decades ago. In the early days of casinos on Indian reservations, the feds tried to stamp them out, claiming they violated federal anti-gambling law. But the tribes eventually prevailed, and in so doing strengthened the notion of reservation sovereignty.